Podium for Jamie at the Radon Epic Enduro Race!

Fresh back to the Alps after a successful race in the  Epic Enduro in the Haute Languedoc region of Southern France.  Velo Carroux are based in Olargues and have run 6 Epic Enduro races there and also hosted a round of the Enduro World Series last year, as well as the opening round of the French Enduro series this year.  The area is famous for its hard technical natural terrain and has plenty of it to choose from!  We raced 10 “specials” or stages on three loops returning to base between each loop.

The organisation is fantastic, the course well marked and marshals at all critical points. Racing is as low key or as hard as you want it.  A lot of people are just in it to survive and try and get round the loops!  There is a massive fall out rate. The last two years we have had wet weather plague the event which makes the riding even harder and so this year only 23% finished: 185 from 800 starters! Fatigue,  mechanicals and bad weather takes their toll but with almost 5,000m of descent and climbing in one day it’s not hard to understand. 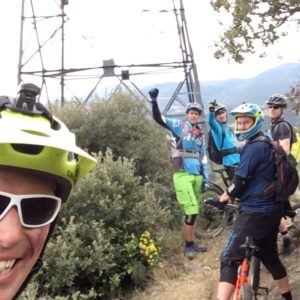 Five of us brave souls took on the Epic Enduro this year. Three drove from the UK: Eelco, Mark and Mason plus Big Paul and me who live in France.  Some had tried and failed last year, for others it was their first time. I knew the format and lay of land a little and this year knew to recce the critical final stage. Plus I wanted to ride as many of the other stages as possible.  “Pylones” was the 10th stage and by far the hardest technically as well. The organisers saved the best ’til last or it was the final nail in the coffin – it depends upon your state of mind as you approach the final départ sign! 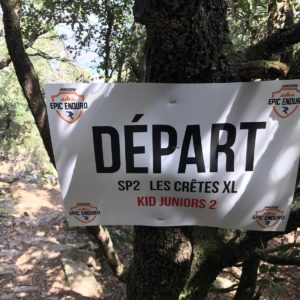 Special electronic chips on a comfortable arm band record your departure and finish time without missing a second. Hassle-free with no fixed departure times for each stage.  However the cut-off times throughout the day mean you always have to keep moving and on a schedule between stages. This is a great format as once you start you just have to make it to the next special in time but you are able to ride together with your friends between stages and just drop into the race mode at the top of stages.

The start was at 4.30 am to give enough time to make such a big day. I’d normally split this kind of height gain over two days. Mason made it to the start line but wasn’t feeling good so he decided not to begin the first stage.  The night leg is hard and technical and again it was wet this year so treacherous. A French rider in front of big Paul crashed badly and broke his leg. Paul, in true Epic Enduro spirit, stopped to help him until the medics swiftly arrived. 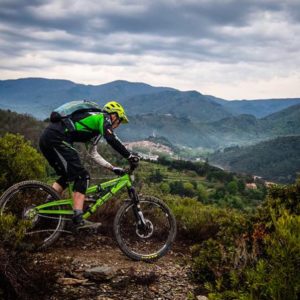 Dawn broke and luckily a UK photographer, Andy Lloyd, got this shot of me on stage 3.

After completing the first three stages you pass back through the start/finish paddock and drop off lights, batteries and have a chance to change and refuel before a huge climb up to a new area. One we had not had the chance to recce. So brand new tracks hitting for the first time at race speed was great fun and a real test of all round Mountain Biking skills  – read and run at its best.  The next stage – stage 4 – stage proved to be our favourite among the group. 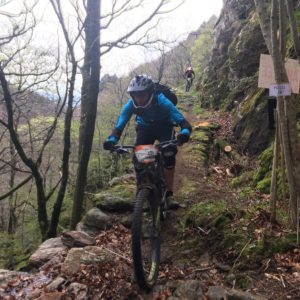 Eelco finishing stage 4 above. It was a totally different style of riding to the first three stages. On natural paths a lot of time and very much like the lake district which is where the Dutchman Eelco lives. 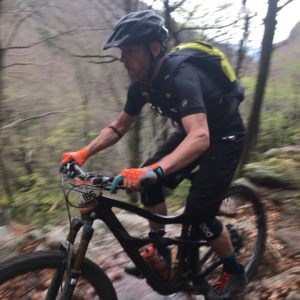 Mark, a London-based rider, finished this year after having someone crash in front of him and bring a premature end to his race in 2018. Mark was probably the only one in short sleeved Assos clothing but we’ll let him off this once! Both Mark and Eelco bought a new bikes to do the event this year as last year they were a little shocked at the technicality of the terrain. 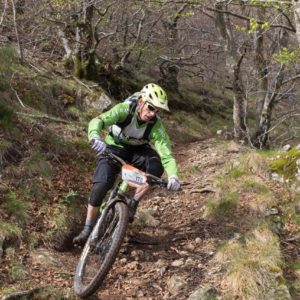 My bike, an Orange Alpine 6, remained unchanged from last year with the same set up as I use to guide in the Alps so it was very suited to this terrain. However I did add a pro core, with some effort, to the rear wheel as last year I had three punctures. I survived with only 1 puncture this year, which I rode on until the end of the stage and lost no time at all. I’m sure it saved me from many more! 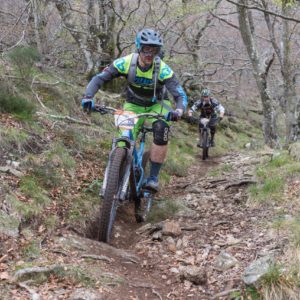 Big Paul rode a Pole with 180mm fork travel and 170 rear. Paul is a local rider from our Giffre valley and was not short of power to make the climbs but a chest infection stopped him from breathing freely and he ended his race after completing the second silver loop while a huge rain storm sweep through.  The rain storm soaked everyone including Mary and my kids who were spectating at that point at the bottom of stage 6! Lots of very wet riders limped back to the paddock. Fortunately as a well-seasoned guide used to bad weather conditions I had multiple sets of race kit and a full change in the back of van. After a whole pizza, coffee and a bike clean me, Eelco and Mark set out for the last loop. Three climbs and four stages to go!  The final cut off was at a brutal time – 11hrs after we started. It was at the top of the third climb and was very hard to make. I had spent too long changing kit and my only puncture needed plugging and sorting between stages 7 and 8. We only just squeezed through the check post!

Then just a tiny stage 9 in super slippy conditions in the woods and finally the infamous Pylones descent to go.  I was so pleased that we had recced these stages and I knew what was coming. In practice I’d followed a young local rider Youn Deniaud. It was a chance meeting but chasing him down the trail had shown me some local fast lines and my endurance from over 34 years of biking had to show – I hoped!  Utterly exhausted with over 4800m of climbing in the legs it was all or nothing on this last critical descent. I knew I was in 2nd place at end of the second loop so it was on this one descent to hold on and get a clean run and see if by some miracle I could gain on the leader wherever he was. If my rear tyre stayed up I knew the lines I needed to run. Getting past any other riders is always tricky but this stage was tight with steep rocky sections. A crash or fall can wipe out any advantage you have. 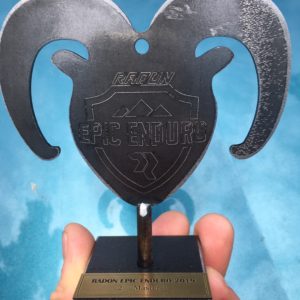 For me it was the most exhilarating stage of the day. A tight swerving tree-dodging traverse (I did hit one tree!) then the first plunge down tight switchbacks, committing to high lines to avoid rock steps down before a sharp turn and a short traverse which leads to a climb! No chance of making it and I’d planned to push it so kept the saddle down because at the top its still a hard technical traverse with rock step ups and drops. Here I started to catch folk again and was blocked on my line a couple times before a final hard short up and the Pylon was sight. This marked the final descent and the steepest plunge down a rocky gully with step downs and a nasty squeeze between two big rocks and a hard right turn. There was a marshal here as it was the hardest section. He told me it was coming- but I already knew it- the line was clear and I just took the plunge at race speed with little time to think. It was intuitive action – reaction stuff. The grey matter and hard wired muscle memory took over. I made the corner and the drops with the adrenaline surging now. I looked ahead and saw some riders on my line, “Allez Allez” I called. In enduro racing that’s the abbreviated way of saying “I am catching you get out of the way!”. They oblige and my line is clear. More tight corners, big step downs and hard 90 degree turns on loose rock. It’s dry and exposed here with lots of supporters on some of the steep sections. I jump down the rock slab and squeeze passed a few more riders. People are broken here walking down the hard sections glad to get out of a racers way. It was really good to know the lines in advance. With a final few turns coming up I knew I’d held my own. I’d done my best and there nothing more I could have given! My arm band bleeped and blinked as I passed the final “arrivée” sign. The Epic was done! 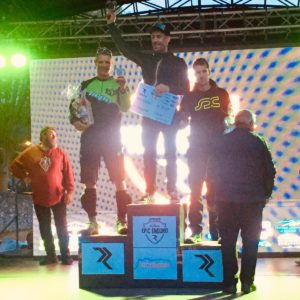 If you want to see videos of the previous event or the short one from this year click here. The full video from this yer will be there soon as they finish the edit. Full results are Here  but I was 30th over all. 2nd in Masters 1. 19th fastest on the final stage – my best one 🙂